Ally is a dog who appeared in the older Pinkfong videos.

Ally is a white dog with a long snout, brown-colored arms and legs. His ears are white with brown tips, and he wears a green leaf on his head.

Not much is known about him, as he very rarely appeared in any videos.

Ally, being lifted by Aris. 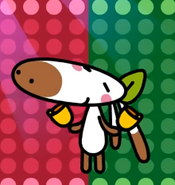 Ally holding jingle bells.
Add a photo to this gallery
Retrieved from "https://pinkfong.fandom.com/wiki/Ally?oldid=4466"
Community content is available under CC-BY-SA unless otherwise noted.